Does anybody know how much of the machine needs dismantled in order to fit a new cable to the X and Y axis switches?

I'm currently retrofitting a Triac VMC, and I'd like to swap the standard NAMUR/2 wire sensors to 3 wire sensors, however the existing wiring is a wire short. I've got the covers/bellows of, and although I can see/feel most of the routing, I'm not sure where/how it's secured.
Top

hi Moray, i believe the wiring is put in when the base is open, so you will find it a shade difficult to do on a complete triac.
Top

Thanks for that.
I had another look tonight, and I'm currently thinking if I remove the table and saddle/cross slide, there might be enough room to get in and change the cable. I'm currently looking at the parts diagram to get an idea of what needs to be removed to separate things.
At the moment, it's looking like the following-
Remove RH table end/screw support block.
Unbolt LH end support.
Slide table off to the right, leaving screw/support block/motor in place
Remove bolts holding Y screw nut block to saddle, and slide saddle of the front.
Then hope I can get enough room to get my hand in and change the cable, without having to remove the Y screw assembly.

So this doesn't look quite as bad as I initially thought - 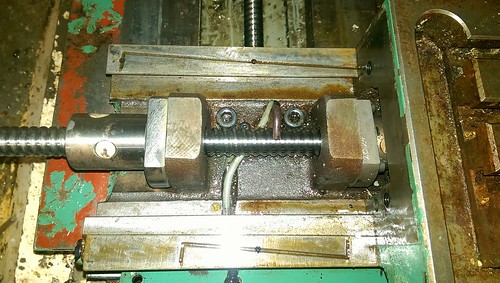 RH block removed, unbolt the Motor & LH block, slide the table to the right (it won't come of as it hits the enclosure), and the cable routing is revealed. I thought it went down through the front of the saddle, but it simply goes straight back and out the lower rear of the saddle, and then I think it's just cable tied to the autolube pipes. I'll need to move the machine away from the wall again and get the rear access panel of to see where it goes from there.

New cable is ordered, and should be of a pretty similar diameter to the existing cable. I've gone for high flexibiliy oil resistant control cable from IGUS (CF9.02.06). Bit expensive, but I'd rather pay for good cable than risk failure.

Although having seen the ballscrew nut setup, I'm now wondering how you're meant to preload them?
It looks like both nuts bolt directly onto the saddle, and are preloaded/assembled in situ.
Top

the preload should be in the nuts sizing rather than the position of the two nuts to each other. I would have thought the second nut is for extending the life and load of the screw.

This preloading of two opposing nuts is common with leadscrews on mill tables, where the nuts use the leadscrew thread.
Top

The cable has been replaced!
Dealing with the cable ties buried in the base casting, and through the rear access panel was the hardest part. Took me a couple hours, some blood, and wishing for a couple extra bends in my fingers, but got there in the end.

I just need to wait for the new homing sensors to get delivered, and I get to repeat the whole base cable routing challenge with the Y home switch wiring.
Top
Post Reply
6 posts • Page 1 of 1